Presenting on camera with a colleague 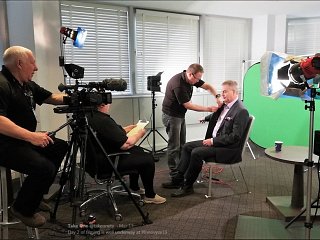 With video becoming such a bit part of many companies marketing strategies, it’s likely that members of staff and clients may be asked to appear on camera. Having two people in front of the camera at once opens up a whole new set of opportunities, and challenges.   So here is our guide to help you prepare for presenting to camera with a colleague or customer.

We normally always recommend to our clients that they have some kind of a script, even if it’s just bullet points covering what you want to talk about; it’s always important that you have a structure and plan to cover what you want to say before it comes to filming.   However, if you’re just doing an informal interview where one person asks you questions and another answers, then you may not need a full script though an outline of the message flow will still be useful.

If you’d like help to get started with your script, read our blog ‘Preparing your script’.

It’s always a good idea to have a couple of run-throughs of your script before you go to film because in our experience, when you start to read your script out loud it can clarify areas that need adjusting.  It also gives you a feel for the timing and pace of the script, and should help you feel a bit more confident when you come to filming it.

Having said that, there is such a thing as over rehearsing. Often when people rehearse too much they get themselves even more anxious and stressed than they were before.  They start focusing and nit picking little things and lose perspective.  Also the brain can start to get over-loaded with the words which can then lead to memory problems.  So, just a couple of run throughs is usually fine. 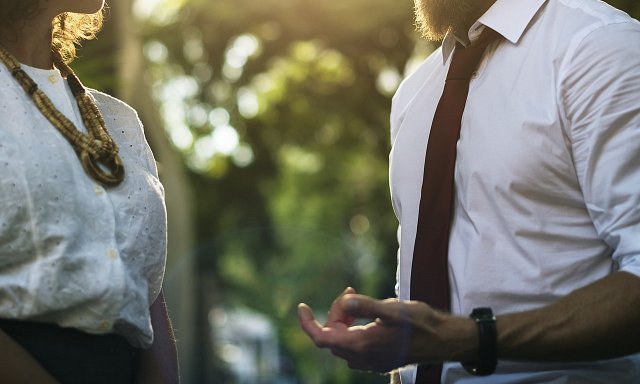 If you have a script we always advise that you use an auto cue instead of trying to learn it off by heart, this will relieve some pressure from you and will help you to keep on track. Especially if there are two of you presenting, an auto cue will help you remember who’s saying what and when you need to say it, this saves you from having to remember where your queues are. You will, however, need to give consideration to your eye line and agree at which points to look at camera or at each other.

What to do while the other person is talking

What you are doing while the other person is talking is important, you don’t want to draw the viewer’s attention away from the person talking by looking around the room, but also you don’t want to just stare transfixed down the camera lens.

Try to glance between the camera and the person talking and engage with what they are saying by nodding your head or smiling, as you would in a normal conversation. But don’t overdo it as this may come across as fake or cheesy. It’s important to stay relaxed and act natural.

Take a look at our vlog about how to appear on camera, taking your body position into account and breathing.

As there are two of you on the screen, this gives you less room to move around. So it’s important that you are mindful of how much you are moving while you are talking. You don’t want to move in a way that requires the other person to shift out of your way or for the camera man to move as this will ruin the shot and you’ll have to start again.  In addition, you don’t want to be moving around too much while the other person is talking, as this may distract them and make them lose their focus.

If you’re both sitting, it’s best to sit with your eyes line level with each other so that you are equally dominant on screen.  It will also help you to appear to be connecting with each other.  The eyes are really important on camera; it’s what people focus on so make sure you stay connected with your eyes. 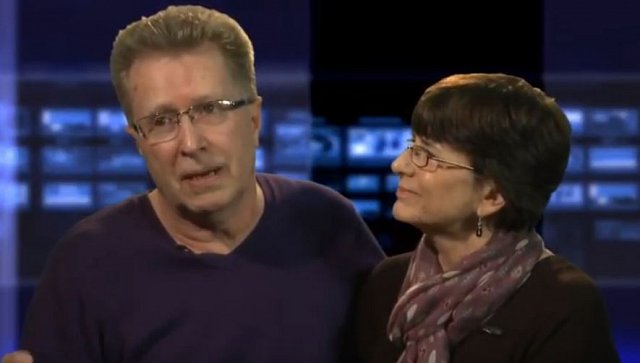 When people are nervous about presenting to camera we find that they often talk really fast to try and get everything over and done with quicker, when in reality if you’re talking too fast you’re likely to stumble over your words and make it difficult for the viewer to understand your message, plus we may have to do more re-takes.   It’s important to remember that the person operating the auto cue will be going at your pace, so if you speed up so will they and in the end it becomes a race to the finish as your words disappear off the screen quicker and quicker.

Also, when it comes to the video it would be a bit strange if one person is talking at a normal pace and the other is talking really fast. Pace is really important and slower is better, in most cases.  So, it’s best to try and relax, slow it down, smile with the eyes and remember to breathe.

We have a vlog which talks more about vocal exercises and smiling in preparation for your video shoot.

We hope that this guide has been useful to you. At Take One TV we pride ourselves on being able to provide a relaxed environment for our clients to appear on camera, and enjoy helping them to come across the best that they can.  We have many years of experience helping people from all walks to life to appear on camera and give a good representation of themselves and their business.

And finally, even if you’re appearing in the video solo, there are still things that you need to consider. If you’d like some help preparing to be on camera, watch our mini vlog series ‘Focus on’

If there’s anything we can do to help you with your next appearance on camera, we’ll be delighted to work with you.