Diary of a Work Experience Student 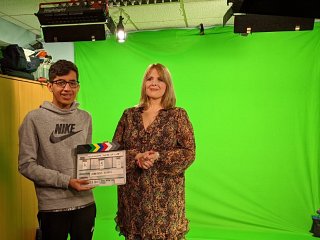 We were delighted to host a work experience placement with a student from BCA in Burchett’s Green this month.  James was in his first year at the College on a Media Studies course.  Although he hadn’t got to the video element of the course yet we showed him how to use a basic animation tool called Powtoon to create some short social media content for Ok Our Kids, a local community interest group supported by TakeOneTV.

We frequently get asked by students and colleges if we can take people on for work experience.  With all of the students, we interview them first to see if they would fit in well with the team and to get an understanding of what they are already capable of so we can identify areas where we can help them to improve.

So if you are looking for work experience, we thought these tips might be helpful for you:

Remember, you are entering a workplace, so it’s important that you treat it as such.

Some of the students, like James, come in and they show professionalism and real potential.

"After being shown around the office, given a Health and Safety as well as company induction, I was introduced to the Take One team.  My first project involved using a basic animation tool called PowToon. I was shown how to use the tool and was briefed for a new project.  I spent some time doing some research for facts and statistics about video marketing;  I then took some of the best ones and made an animation video about the advantages of video marketing."

"On Tuesday I made another animation video but this time it was for a local community interest company called Ok Our Kids. I had to make a video to advertise their ‘Watch Out!’ book which teaches kids how to stay safe in the modern world.  It covers all sorts of subjects including cyberbullying, stranger dangers, safe cycling and environmental concerns.

While making this video, I learned that I need to leave the text on the screen for longer than anticipated to give everyone enough time to read all the text on the screen. I also learnt that it's important to make the words big enough so that it was easy for people to read on small screens, as it is likely that some people will watch the video on their phone or mobile device."

James did really well with this animation projects and showed good creative ideas, taking on board the need to respect the OK Our Kids branding and style.

"On Wednesday I did another animation for Ok Our Kids following the theme from the day before but this time introducing the company’s mascot, KOKO the duck and his friends.

Later in the day, the technical director at Take One went through with me how to properly set up a video camera for green screen work."

On Wednesday we were preparing the studio for a two day shoot and our Technical Director, Steve Groves, explained to James the importance of setting the camera white balance and using time code, either as time of day or camera generated.

"On Thursday there was a client in all day filming lots of short videos, and I got to help with the filming.  I had to log the shots on a clapperboard, say on camera what scene and take we were on at the start of every take, plus I had to keep a written record of the clip and timecode details on the clip sheet."

During the studio shoot, James was shown how to take the time code for each shot, load the clapper board and mark each scene so that the editor could find the appropriate ‘good’ takes.

"On Friday I got to go out and do some filming in the park with the TakeOne team and a couple of clients. We were filming with the same clients as the day before, and they needed some shots of them outside playing sports and doing physical exercises to go with one of the videos that they were making.

Then when I got back to the office, I finished off the 3 short animations introducing KOKO the duck for OK Our Kids." 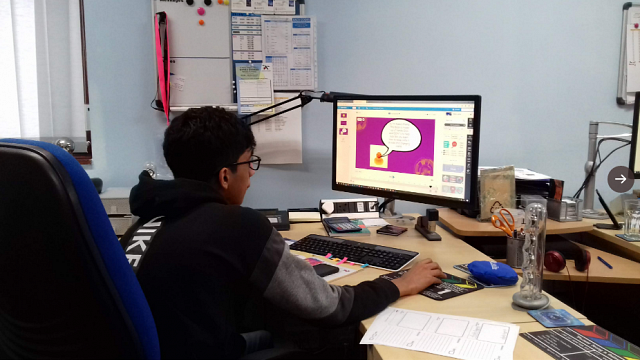 On his final day of work experience, James went out with the film crew to a local park to shoot some exterior shots of our client doing exercises which would be used to support their programme on the benefits of looking after our physical as well as mental wellbeing.  The team enjoyed an hour or so of lovely sunshine and got some great shots of activities such as playing football, yoga and running.

James said he had enjoyed his experience with TakeOneTV and that it would be very useful when he went back to college as they would be starting their first proper video project and he would be able to share his knowledge with his group.

It was great to see James’s enthusiasm and we were pleased to be able to help him get a glimpse of the inner workings of a video production company.