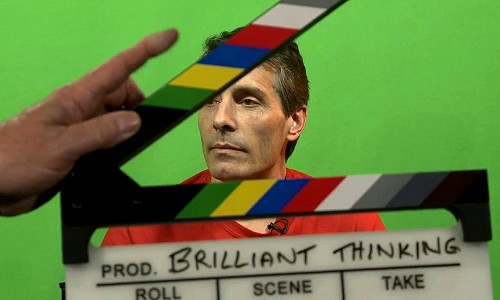 The Art of Brilliance and Brilliant Schools are all about instilling positivity and helping whoever is in contact with them to thrive and to flourish. The team at ‘Brill’ strive to equip their customers with methods and resources that will get the best out of them and their teams; to become a part of the 2%percenter population who help themselves and those around them to be on top form.

Much of the work done by the ‘Brill’ team is face to face and highly interactive which hasn’t been so easy this year, but true to form they came up with ways of taking their message on-line covering subjects such as how to shine and be your best self, how to be a brilliant kid / parent / teacher / manager, and generally an all-round better human being.

What was the Project?

Take One were originally introduced to the Doctor of Happiness (yes really) Andy Cope, founder of Art of Brilliance via the National Learning Trust (NLT), a body which trained and mentored education specialists. Andy has studied and worked within positive psychology since the early 2000’s and is a true inspiration. We recorded a series of training, motivational and promotional videos over a number of days with the Art of Brilliance team and it was a real joy to work with them; their passion, drive and tenacity blending well with the Take One’s team and business ethos. We feel so privileged to have produced and edited a number of programmes for the Brill subscription service.

The project was spread over five studio days between December and March at our studio premises in High Wycombe allowing the different members of the Brill team to schedule time in their diaries for the filming. There was a mix between green screen and infinity recording styles, as well as lots of physical props which were integrated with digital props in the edit suites! Although the Brill team know their stuff and don’t really need prompting, we did use the on-site teleprompting because with so much content it just helped to keep things on track and was used to assist the crew and editor further down the production line.

The initial editing of the raw content started after the first couple of days of filming so that the Brill team could see how some of the material was coming into in the edit suite. There was also quite a bit of animation and motion graphics work required, which was done by our editor in the graphics suite after the first pass storylines were approved. And of course our Sound Engineer had a great time adding some lovely sound effects and mixing nuances of soundscapes to engage with an on-line audience.

The end products were a lovely mix of captivating presentations, animations and interactive clips. These videos have ranged from short and snappy 30 second clips with positive anecdotal ideas through to a game-shows, story-telling and some longer engaging programmes, one of which included the ‘autopsy’ of a fluffy stuffed dog.

The best thing from Take One’s perspective was that the Brill team were awesome to work with and we were so pleased to see the videos we made for them being used to support their clients on-line. It’s such a pleasure to know that the teamwork from all sides is having a positive effect for so many people.

What the Client said

Dr Andy Cope, MD Art of Brilliance said: “We see the Take One team as part of our family. They ‘get it’. Not just the messages of positivity but the fact that we need an efficient and super-professional production team… that is also friendly, knowledgeable and is able to take out ideas and make them better. Take One showed us that the ‘business’ of presenting doesn’t have to be hard work. It can be great fun!”

Asked about the impact of the project, Andy said: “The end product is superb. With TakeOne’s expertise we now have a library of videos that support our workshops and keynotes. We have a range of resources from video shorts, to longer pieces, to social media output and wonderful animations.”

“It’s helped propel our business to the next level. Business doors have opened. We have developed a truly blended learning approach that’s appreciated by schools and businesses around the world. I know our competitors are jealous! “