A day in the life of Take One TV 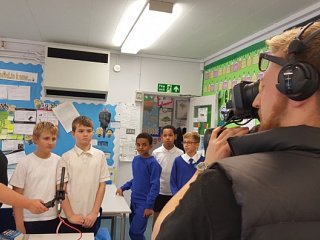 This particular blog post will be told from a recent Media graduate’s perspective after joining Take One on their shoot to Our Lady of Lourdes RC Primary School.

The day started off with an extremely early start, the crew meeting at Take One’s Media House at 05:45 to arrive in Wanstead, London at 07:15. Making our way to London in the dark, travelling in two cars, one filled to the brim with filming kit, I found myself already quite tired yet intrigued to what a day in the life of a Take One TV shoot would hold.
Arriving at Our Lady of Lourdes Primary School on time according to the schedule, we unloaded the car and began to rig and set up the equipment in our allocated room. At this point I immediately noticed the efficiency and organisation of the crew, and how important it was to stick to the schedule. The team was split into two; one team filming interviews with teachers in front of a green screen, and the other filming cutaways and interviews with teachers and pupils in their classrooms.

I firstly joined the green screen team where I was in charge of the autocue. Before we began filming each teacher, we had to apply makeup to them… I know, I was surprised too! With filming in HD, every detail gets picked up by the camera, including shiny foreheads, which is where the anti-shine cream came into use.
During my time filming the teachers in the green screen room, I learnt how filming even a very short piece of footage can be so time consuming. You always need to leave plenty of time for disruptions and things to go wrong. We filmed a short clip of the head teacher, which I initially thought would have taken about a maximum of thirty minutes. But due to all the noise disruptions we faced being in a school, and some lighting issues, it ended up taking us much longer than anticipated, leaving us behind schedule. But I learnt that whilst you can be as organised and efficient as possible, you can never be fully prepared for what may happen on the day of the shoot.

I spent the second half of my day with the other team filming short interviews with the pupils and teachers. It was interesting to see how these interviews were shot, especially when interacting with the children who, I have to say, were extremely well behaved. There were times when we filmed extra shots, because we felt that it would fit in well with the rest of the footage. We had to be very organised about what we were filming, where we were filming and at what time. We had to ensure that everyone we interviewed had filled out a consent form, and that every child who appeared in our video was allowed to be shown.

We ended up finishing the shoot at 4pm; we packed all the equipment away, and went around to make sure we hadn’t left anything behind in all the rooms where we had filmed, which Take One TV called an ‘idiot check’. After leaving Our Lady of Lourdes after seven hours of filming, we made our way back to the Media House in High Wycombe, travelling in the dark again, getting stuck in motorway traffic along the way, and stopping off for a drink, we finally made it back to base at 7pm.

Joining Take One TV on their shoot gave me a great insight as to what a professional shoot entailed, and opened my eyes to all the different problems you can be faced with, with even the simplest of clips that need to be shot. Shadowing the cameramen and sound operator gave me the chance to observe how different adjustments needed to be made in order for the clip to be of the highest standard without any lighting, framing or sound issues. I also finally understood why people drink coffee so much, and I even surprised myself by drinking three cups for the first time in my life. All in all, the day in the life of a Take One TV shoot was an excellent experience and I look forward to joining them again.