Drones for Video and 360 Degree Footage 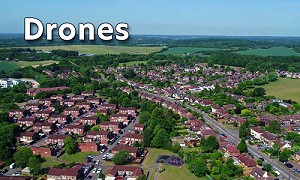 Even though technology in the video industry is constantly in a state of movement it does not mean that every new trend needs to be adopted by marketing, visualisation and production companies. Remember the 3D hype? Well, it was never going to be a big seller though some businesses made a profit for a short time and in some cases, usually films, 3D can be used well if used subtlety.

One thing which may need attention though is 360 video, and more importantly 360 Aerial video. 360° video is a different kind of storytelling. This way of filming sees creators approach it as an immersive experience. Unlike normal videos, viewers can control what they see. The viewer can control what is recorded by tilting and panning the recorded camera angle on their computer or mobile device via the video player.

For publishers who want to deliver an immersive rich media experience this can be an excellent tool. This new type of video can produce amazing footage, but due to it being new technology there are some downsides and challenges to production.For training purposes where the budget can cope these sort of videos could be really beneficial.

There is a pilot at the moment in the UK where 360 degree video is being used to help young drivers understand the risks of driving without good care and attention. It puts them at the scene of an accident and they feel immersed in the event; definitely makes them think more seriously about safety.

Drones for 360° video and camera systems

Currently, no production/retail drones exist, neither do the 360 degree video camera rigs for the drones.

If needed, a 360 degree video drone will have to be built, developed and maintained specifically for this purpose. Go Pro and a number of others are currently working on different systems, which are rumoured to be released later in 2016.

Currently there are multiple camera set ups for drones. The cameras are Go Pro set ups with GP3, GP3+ and GP4 with the GP3+ and GP4 being the most popular. The consumer 360° video cameras tend to be lower quality, HD or 4K with small sensors.

A number of higher end systems are being developed, but could potentially be too heavy or extremely expensive for drone use.

The drone airframe needs to be designed specifically to carry the 360° camera. Hexacopters would be a good platform as they have a good power to weight ratio and give some level of redundancy in case a rotor should fail mid-flight.

Weight For the UK

The desirable weight that the drone should be designed and built at is under 7kg in total. Staying within this weight means flights will be allowed legally in urban areas and controlled airspace by an operator who is suitably licensed and insured. You can of course buy non commercial drones from many outlets in the UK and most now have limiters included in their set up to prevent flight above the safe height for non professional use.

There is talk of YouTube creating software that will detect drone footage and clarify licence coverage, but it is only talk at the moment and we do have to wonder if it will be worth the investment as almost certainly the next must have bit of video technology will be just around the corner!

If you'd like to talk about how drones could be used for your next video production give us a call and our CAA qualified drone pilot will be happy to talk you through the options.