How much does a video cost?

It’s the most common question we get asked!

In fact, when I tell people that “I make corporate video programmes…” for a living. They usually say, "That’s interesting....so how much would it cost me to have you make me a short video for my website?”.

It always makes me smile because, well it really depends on so many different things. You see, buying a creative service is not like buying a box of 'Rice Krispies' off the shelf in a supermarket (other breakfast cereals are available!). Surprisingly, it’s also not necessarily the length of the video that determines the price; often shorter pieces are more expensive than long format videos.

So, what does determine the price?

The choice of who you choose to make your programme will definitely affect the budget.

You could, of course, engage a university graduate to shoot a short video for you using his (or her) Canon DSLR (Digital Single Lens Reflex); edit on his (or her) Macbook in their bedroom at home. For that, you’ll probably pay around £300 – £500. Alternatively, you could employ a marketing agency which will most likely set you back in the region of £10+K, or you could engage a professional video production company for a budget which is likely to fall anywhere between £850 and £5K+.

What else influences cost?

“What do you mean by ‘Production Value’?” I hear you ask, well it’s what you finally see on the screen, how much time and effort has gone into producing your video, and the skill and experiece of the creatives on the project – this in turn will also be determined by the amount you’re are prepared to pay and that should be guided by the ROI.

There used to be an old guideline that stated that the production budget should be 10% of the placement cost of a 60 second commercial. Now with more companies cutting out the middle man and going directly to the video producer, combined with new production technologies and with the organic reach of social media, production costs have come tumbling down. Many years ago we used to say base the cost on paying £1K per minute of completed programme. Nowadays you may look at a ball park of £500 a minute, but again that isn’t ruled by duration and a 2 minute programme may well cost you pro rata considerably more than a 20 minute programme, depending on the content and target audience.  The first thing to decide is what sort of budget you would feel comfortable with and then ask a reputable video production company such as Take One to work out a plan for creating some options for you to consider. They may not use all of your budget, but if they know your comfort level they will be able to offer suggestions to achieve your target audience.

In the following diagram you may choose any two points but at the expense of the third. E.g. you can have fast and cheap but the video won’t be good. Fast and good which will not be cheap. Or cheap and good but delivery will not be fast. 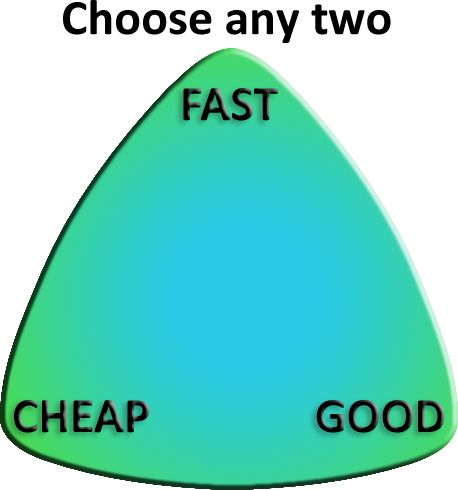 Many people ask me what the difference is between a videographer and a video production company.

Videography is an American term and tends to define stills photographers, or in the UK recently university graduates who have entered the world of video production through the use of their DSLR cameras to capture events such as community events or weddings, and have ventured into the realms of filming corporate video through a friend of a friend. They get started with this format when they are studying for a Media Degree, mainly because the DSLR format is cheaper and Universities can fund these more easily. Plus a number of equipment manufactures have very cleverly hooked people in at this early stage with really beneficial deals for their equipment.  There's nothing wrong with this by the way, so long as you know what you're paying for.

Typically, a videographer is a ‘one man band’ who wears several hats, cameraman, sound recordist, editor, director etc. They generally work from home with little or no overheads, and by the way if you are using a videography it’s a good idea to enquire whether they possess public liability insurance and have a valid policy for health and safety, GDPR etc., – because it they don’t, you could end being liable for any claims that may be brought should an incident occur whilst they are working for you. This is particularly important with drone videos!

Anyway, they tend to specialise in weddings, start-up businesses, self-shot ‘how-to’ or unboxing videos for YouTube consumption. Many videographers fail to sustain their position in the industry and disappear after a few years, unless established as a commercial photographer, which is what DSLR cameras are really meant for.

Budgets are at the lower scale of circa £200-300 so for a throw away bit of video that doesn’t need to stay on brand, or is for a social media piece with a short shelf life and more of a news piece than a long term investment, it’s an option. It’s often akin to DIY video, but with just a little more knowledge inserted. These days, if you want a really basic throw away piece you’re probably just as well to do it yourself on your iPhone - if you'd like some pointers on using an iPhone for video get in touch and we'll share some of our collateral or invite you to a free workshop when we next run one.

The Production Company is a professionally run business, located at an established office, and trained in the television sector. Crews tend to specialise in different aspects of the production process, e.g. camera work, sound recording, editing and graphic design. The Producer/Director will often liaise with the client and follow the whole production through to delivery. They often call on a bank of qualified freelancers to provide high end services. Budgets range from circa £2K+. Generally, well established with good administrative practices, including all relevant insurances and HSE protocols. A good production company will back up your valuable material, and keep good business continuity plans so that you can come back sometimes years later and still make use of the materials – it happens more often than you’d think, particularly when a business moves to new premises!

The Marketing or Digital Agency would provide a polished video production, but it’s usually as a part of a campaign for a whole range of other things, with a budget to reflect that scope. Agencies rarely have in-house practical video production facilities, if they’re not producing video full time it’s not a practical option, so they would tend to outsource and brief a production company, then oversee the creativity.

Budgets will reflect the quality, creativity and administration that has contributed towards the production, and will include a proportion of the overheads associated with running a large company, plus will include all expenses – after all there’s no such thing as a free lunch! Production budgets will include up to a 40% mark-up on the video production company’s allocated spend. However, paying a high price doesn’t guarantee you’ll get what you expected either, you’re likely to have less direct contact with the people who will actually create your programme, and they will be receiving only a small amount of what you think you are paying for the video.

In summary, you takes your pick and pays the price, the cheapest is not necessarily the best but then neither is the most expensive. By choosing a good, well established production company, being open about your budget levels and sensible about what you want the video to achieve, you’ll get good production value on the screen, which is after all what your customer’s will judge you by.

So, let’s ask the question again: “What’s it cost to make a 60 second video?” The closest answer is: “What value do you place on your business?”

If you'd like to get a free review and consultation about how to plan for your next video production or are just thinking about your first video, do get in touch and we'll help you with options and ideas for getting the best results.