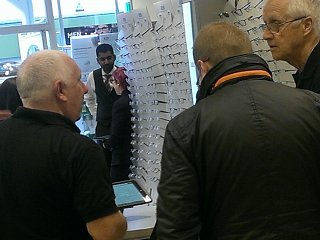 The filming of a corporate video is only a small part of the process; the most important part is the planning and preparation that takes place before filming. However, assuming you've got to the filming stage and are well prepared, in this 3 part guide we share a few tips on how to ensure a successful shoot based on our knowledge of over 25 years in the video production industry.

Discuss your shoot with other members of the production team and make sure you're clear on what shots you need to tell the story. If you're on your own, plan all the shots you are likely to need to make up your story and list all the elements you want to get in your video. It sometimes helps to sketch out a rough storyboard. This will help you to develop your shot list as you will be able to easily visualise what will be required. Think about what's going to look good visually, and how your shots are going to come together sequentially. Check all the equipment you will need for the shoot and don’t forget plenty of media stock, you will use more than you think so take extra media with you. Remember to take a tripod or something like an old sock filled with dried peas on which you can rest the camera, this will help to stabilize your shots.

If possible try to do a full reconnaissance of all the locations in which you hope to be filming. Take note of any permissions or permits you will need to obtain beforehand and familiarise yourself with any potential Health and Safety requirements which may have to be taken into consideration. Look at the available lighting, ask yourself do I need to take in any additional lights or is ambient lighting sufficient? Listen to the sound – do I need special microphones to cope with any extraneous noise or do I need to find a quieter location in which to record my interview with the CEO? Try to work out a logical progression for the filming so that you don’t have to recover areas you’ve already filmed a previous scene in. Moving from one location to another can take up valuable time in a tight shooting schedule so you may need to shoot out of sequence and rearrange the shots back in order later in the edit suite.

Think before you shoot and don't waste media. Be aware of what you're shooting and when the media is live. Don't leave media running live unless you're taking a shot. For example, switch the camera to standby when you're changing from one shot to another or focusing. Focus the camera and compose the shot before you start to record. Wait until you have the shot you want and then fire up the media. That way you'll save a huge amount of time later when you're in the edit suite and you won't have to go through a hours of junk to find the 2 minutes of shots you want.

Use a good quality microphone to capture the sound. Don’t rely on the microphone built into the camera, generally these are of poor quality and they are liable to pick up handling noise or the sound of the zoom lens. If shooting an interview or a piece to camera (PTC) NEVER use a built in microphone. I can say with all certainty that the sound you get will not be useable as it will probably be inaudible. Be sure to plug a set of headphones into the camera and check your audio to make sure you're getting good sound, if you can’t hear it through the headphones then you will not be able to hear it in the final production. If all you can hear is background noise then move to a quieter location. I can’t tell you how many times I’ve been asked to put this right in the edit and the answer is always “No – that is what you have recorded and sadly there is nothing now I can do to correct it.”

Hold your shots for at least 15 seconds, before you begin to pan or zoom or go onto another shot. The editor will need a little bit of video at the beginning and at the end of every shot to allow him to create an effect such as a dissolve from one shot to the next. So allowing 15 seconds at the beginning and end of a sequence will ensure you have enough video of a scene to work with later when you do your editing. When you're starting out, silently count out the 15 seconds to yourself - to make sure you've held a shot long enough. Remember that you can always take a 15 second clip and make it a 2 second clip during editing, but you can't take a 2 second clip and make it into a 15 second clip.

If you'd like to know more do get in touch and we'll invite you to a workshop on planning your shoot, or arrange for a free discovery session to make the most of your video production plans.