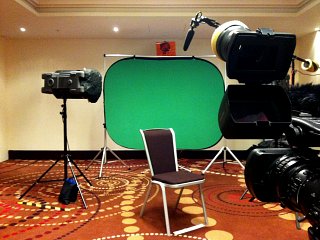 In the second part of our two part Guide to Planning your Video Shoot we cover use of a tripod, panning and zooming, shooting sequentially and framing your shots.

However, firstly when ready to record..... Shut Up When You Shoot.  In other words, when you press the record button, quiet please! Remember, when the camera is rolling it picks up all the ambient sound, not just what you're focusing on; and you won't be able to separate the unwanted audio out in the editing process. Sometimes people forget that although they are not on camera, they can still be heard! It's also a good idea to ask everyone to turn their mobile phones off for recording as even on silent these can interfer with radiomics. I know, it's hard to be without that phone for awhile but really you will survive! Don't talk while the camera is rolling, either to yourself or with other members of your team, and no humming. This is especially important when you're shooting B-roll rushes like natural sound, such as the noise of a busy street or a nature scene, where the sound is important to the shot and can get you out of a hole later in the editing process where you need to 'hide' transitions.

Avoid hand holding the camera, even if it has image stabilization as a part of its functionality. Hand held shots are always wobbly and the constant movement of the camera makes the viewer feel uneasy. Use a tripod or a sock filled with dried peas to provide a stable base for your camera. Even a cheap tripod is better than none at all, although one with a good fluid head will provide much smoother camera pans so it’s worth paying a little extra for a tripod with a good fluid pan and tilt head.

TIP - If you have no other option than to hand hold the camera, then zoom out to the widest shot and physically move closer to the subject. This will reduce the amount of camera shake, also turn on the ‘steadyshot’ or ‘image stabilization’ function if your camera has this.  Avoid using the zoom (telephoto shot) as this will tend to accentuate any camera shake. Do be up front for shoots rather than hanging from the back on the zoom, a good camera operator needs to be with the action.

Try not to constantly pan from side to side or zoom in and out with the camera - hold your shots and look for the one moment that's really captivating. If you're constantly panning and zooming, the one shot you'll really want to use will lose its impact. Unless used deliberately it looks unprofessional, and worse still will irritate your viewer. Importantly, never use the zoom whilst the subject is speaking - you do see this occasionally on news items where the message is of the moment and of more importance than the visual, however it's not good practice for professional video production purposes and particularly not for business communications. Start with a static, wide angle shot, and hold it for 15 seconds. Then make your move to zoom in or pan, and hold the next static shot for an additional 15 seconds. This will give you three usable shots - the wide-angle, the close-up and the zoom in between - to choose from in the edit room. This is especially important for video you're using on a Web site because video with a lot of movement - such as panning and zooming - often doesn't display well on the Web. Video clips need to be compressed to play on the Web, and that means if there's lots of movement in your clip - such as pans and zooms - it will appear choppy and slow. Similarly, to get a close-up it's better to keep your camera set to a more wide-angle view and move the camera closer to the subject of your shot, than to have the camera farther away and zoom in for the close-up. A telephoto shot using the zoom feature will accentuate movement by the subject and make the shot appear shaky. Where possible don’t be afraid to get ‘up close and personal’ rather than be a long way off and use the zoom.

This is especially true when shooting B-roll such as crowd scenes or nature shots, rather than a static shot of an interview with someone. Remember that you will be determining what the viewer sees and how the story unfolds, so try to shoot discrete segments that you can then assemble into that story when you're editing. Here's an example: Think of different scenes, as in a movie. Each of those scenes is made up of sequences. In each sequence, you need to follow the action, and shoot wide, medium and close-up shots. Say you want to capture a person arriving at work in the morning on her bicycle -- that's one sequence. It could be made up of the following shots: the person pulling up to the building, getting off the bicycle, chaining the bicycle to the bicycle stand, taking off gloves, taking off her helmet, tucking gloves into the helmet, and walking into the building. It might break down like this: a wide shot of her arriving. A medium shot of her getting off the bicycle. A close-up of her pushing the front wheel of the bike into the bike stand. A close-up of her chaining the bike to the stand. An extreme close-up of her taking off her gloves. An extreme close-up of her eyes as she looks at her hands while she's taking off her gloves. A close-up of her taking off her helmet and tucking the gloves into it. A close-up of her straightening her hair and looking at the building. A medium and wide shot of her walking into the building with the helmet tucked under her arm. Don’t be tempted to shoot the whole sequence in one wide shot, this makes it impossible to cut the sequence down in the edit suite should it prove to be overly long. Obviously, this means that you may need the subject to repeat the action, exactly, several times to capture all these shots so allow time and be patient.

Framing and Composing Your Shots

Be aware of composition in your shots and how you frame your shots, particularly with interviews. For example, avoid a shot of a person with a plant or pole in the background. It will look like the plant or pole is growing out of the back of the person's head. When shooting interviews, pay attention to your surroundings and don't be reticent or shy about rearranging furniture, moving things on a desk, pushing plants out of the frame of your shot, etc. to improve the setting, or asking the subject of your shoot to change positions so you properly frame the shot. And if you're having technical problems, don't be afraid to take charge and stop the interview until you can properly set up the shot. The contributor will want to look their best and they are trusting you to ensure that happens.

Leave the proper amount of headroom above the person’s head and an appropriate amount of looking room, that is space in the direction the subject is facing. The camera should be set up at about the head height of your subject.

Look at the background and keep it simple avoiding a busy or congested back scene. Each scene should have a single story to tell. To simplify your shot, you may need to alter the camera position, alter the size of the image, or select another background. So there we go, some hints and tips to help you understand some of the intricacies of making a movie! If you'd like to chat about some of video production services for your business please do get in touch, we're happy to talk!