What to wear on camera 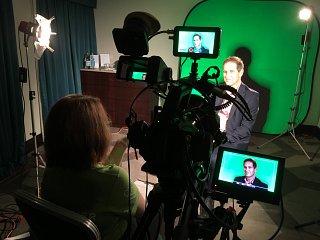 You’re going to be interviewed on camera: What should you wear?

A pale coloured shirt or top is better for the camera than absolute white. In the same way as a stills camera finds it difficult to expose someone’s face who is standing in front of a bright window, it is hard for the television camera to be exposed correctly for the face and for the ‘whiteness’ of the shirt.

Black clothing is also best to avoid where possible as the camera has great difficulty in resolving information in large areas of black.

Fine stripes, checks or herring-bone patterned clothing should also be avoided – the effect when seen through a camera is that of ‘strobing’ or ‘flashing’ – this can be very visually disturbing.

If you are unsure then it’s always wise to take along an alternative shirt, top or jacket. T-shirts with obvious advertising logos and slogans or overt statements should not be worn as it may not be appropriate to be advertising another brand, and it can restrict manipulation of the image in post production.

Why should I avoid wearing green?

When we were filming in Brazil a few years back, the set designers of the local TV station had painted the set in a rather lovely shade of green that complimented the client’s logo colour. However, green can be seen as an ‘unlucky’ colour for some in the artistic performing media world, and one key contributor refused to take part till the background was repainted!

However, the main reason you may be asked to avoid wearing green, (or in certain cases, blue) is because an effect called chromakey or CSO (colour separation overlay) also known as ‘Green Screen’ could be used.

This is an effect where, when a person stands in front of a completely green screen, it is possible to superimpose another picture (possibly a graph or diagram) behind the person standing in the studio. This technique makes it possible to superimpose a picture of the Eiffel Tower behind someone actually standing in front of a green screen in a studio in London! If the person was to wear a green tie or shirt, then the picture would also ‘bleed’ through the tie or shirt making that part of the person seem invisible and destroying the visual effect. Watch out for this CSO use on the news, it’s used pretty well every day and sometimes if the keying has been done in a hurry or the lighting was quite right you’ll see a tinge of green around the persons head or edge of the shoulders.

For more information on how we can help your next video production go smoothly, just get in touch and we'll arrange a discovery session to explore the opportunities for your business.